By aleks - March 02, 2017
Film host:  Hanna Gil, translator of the film's English subtitles - you will have a chance to ask her about the process of caption translation. 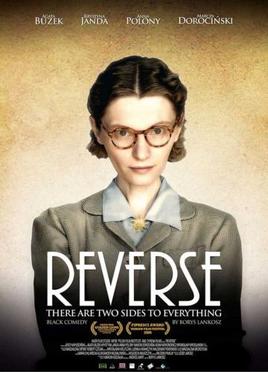 Sabina’s lack of even a prospective husband is a point of constant contention for her well-meaning, though meddlesome, mother and grandmother.

At their behest (and as a result of their scheming) Sabina entertains a number of suitors, all of whom fail to interest her – until Bronislaw Falski mysteriously enters the scene.

Praised for its black humour, attention to character, and clever stylization, REVERSE was an enormous critical hit in its native Poland, capturing the Golden Lion for Best Polish Film, along with four other awards at the 2009 Polish Film Festival and was also honoured with the FIPRESCI award at the Warsaw International Film Festival for the best Eastern European debut. English sub-titles.

Reverse was also very well received by American audience and film critics - it was shown at the SPFF a few years ago.