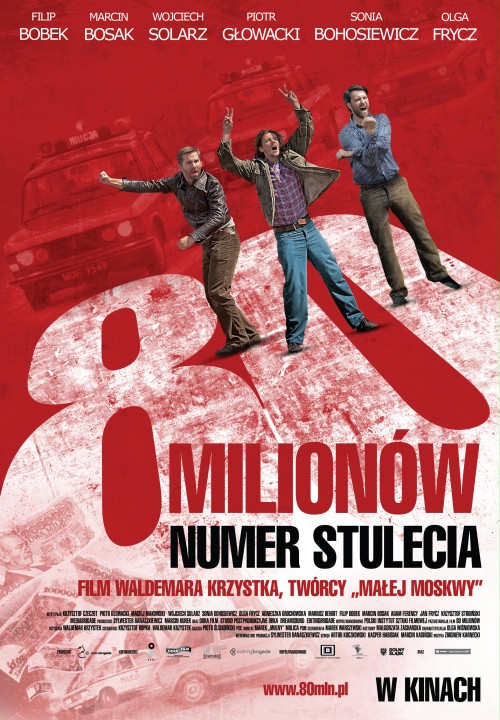 Film host: Joanna Filipek brings us another film about Solidarity  era: activists prepare a bravura heist, taking out 80 mln from a union bank account just before it is blocked by communist authorities.

As always, with English subtitles at Polish Home upstairs, Friday, December 15, 7:30 pm.  We actually mean 7:30 sharp from now on, no waiting for people showing up at 8 pm, as it's hard to start the film discussion late at night, when everybody thinks about safely getting home.

80 Million (Polish: 80 milionów) is a 2011 Polish drama film directed by Waldemar Krzystek. The film was selected as the Polish entry for the Best Foreign Language Oscar at the 85th Academy Awards, but it did not make the final shortlist

From Hollywood Reporter:  [...] Based on real events, the official Polish entry in the Best Foreign Language Oscar race is a punchy period thriller with a universal feel-good message. Set at the dawn of Poland’s final turbulent decade under the yoke of Soviet Communism, 80 Million joins the swelling ranks of dramas from former Eastern Bloc nations that re-examine the dying days of Russian rule - films like Kolya from the Czech Republic, The Lives of Others from Germany, and 4 Months, 3 Weeks and 2 Days from Romania. It may just be coincidence, but two of these three won Academy Awards.

The 58-year-old director Waldemar Krzystek grew up under Communism, but 80 Million is less a political drama than a lively hybrid of action movie, heist thriller and dark comedy. Shot in a fairly conventional but fast-paced style, it features double agents, treacherous lovers, divided families, car chases and wily Catholic priests working for the anti-government underground. Classic spy-movie material, in other words, with a stirring and easily understood good-vs-evil plotline that could play well to foreign audiences with the right marketing. [...]

From Eye for Film: [...] Though 80 Million may lack the wit and style of most bank robbery films, the awareness that this is a true story makes it differently gripping. Patient, observational, it generates tension from small glances and elicits sympathy wih its depiction of everyday lives, which by contrast make the scale of the scheme awe-inspiring. In a pivotal scene, the thieves discover that they haven't brought enough bags for all the cash - they literally couldn't imagine that much money. [...]