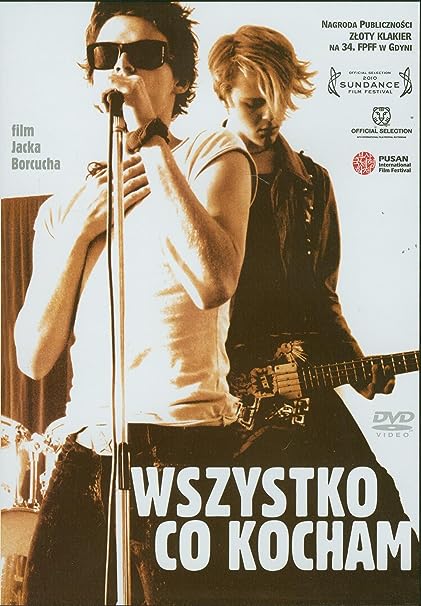 Film host: our UW Polish Studies Fulbright scholar, Dr. Justyna Budzik, with a story that takes us back to times of rising Solidarity movement.

As always, with English subtitles at Polish Home upstairs, Friday, November 17, 7:30 pm.  We actually mean 7:30 sharp from now on, no waiting for people showing up at 8 pm, as it's hard to start the film discussion late at night, when everybody thinks about safely getting home.

All That I Love  •  Poland 1981: Behind the iron curtain, Janek, the teenage son of a navy captain, forms ATIL (All That I Love), a punk-rock band whose songs express a frustration with socialism and a desire for freedom, echoing the sentiments of the rising Solidarity movement. At the same time, Janek finds love with Basia, a young woman whose father is part of the movement and disapproves of Janek’s military family. When growing social turmoil leads to martial law, Janek’s relationships and ATIL’s music cause serious consequences for his family members, lovers, and friends.


From Hollywood Reporter: You don't usually find the words "warm" and "lyrical" associated with punk rock, but filmmaker Jacek Borcuch proceeds to bring the seemingly contradictory elements together in "All That I Love," a Polish coming-of-age drama set against the political backdrop of the Solidarity movement circa 1981.
Graced by dynamic lead performances and spirited direction, this autobiographical film proves hard to resist even if it lacks the sort of rawness and restlessness that usually goes with the punk territory. [...]

From IndieWire (Brandon Judell on 2010 SIFF): [...] Jacek Borcuch’s “All That I Love” from Poland is a highly affable feature about a group of lads forming a punk rock band in 1981 as their country goes totalitarian. Unlikely heroes, they get to sing, and the lead loses his virginity on a beach. What better way is there to spend one’s youth? [...]

From Culture.PL: [...] The film received favourable reviews at the Gdynia Festival and won the art direction award (Elwira Pluta) and Złoty Klakier / Golden Clapper Audience Award for the most applauded film.
The film was the first Polish production to screen at the Sundance film festival, making its debut in 2010. The Polish Oscar Commission, chaired by filmmaker Agnieszka Holland, selected the film as its candidate for the Foreign Language Film category for the 2011 Academy Awards.  [...]