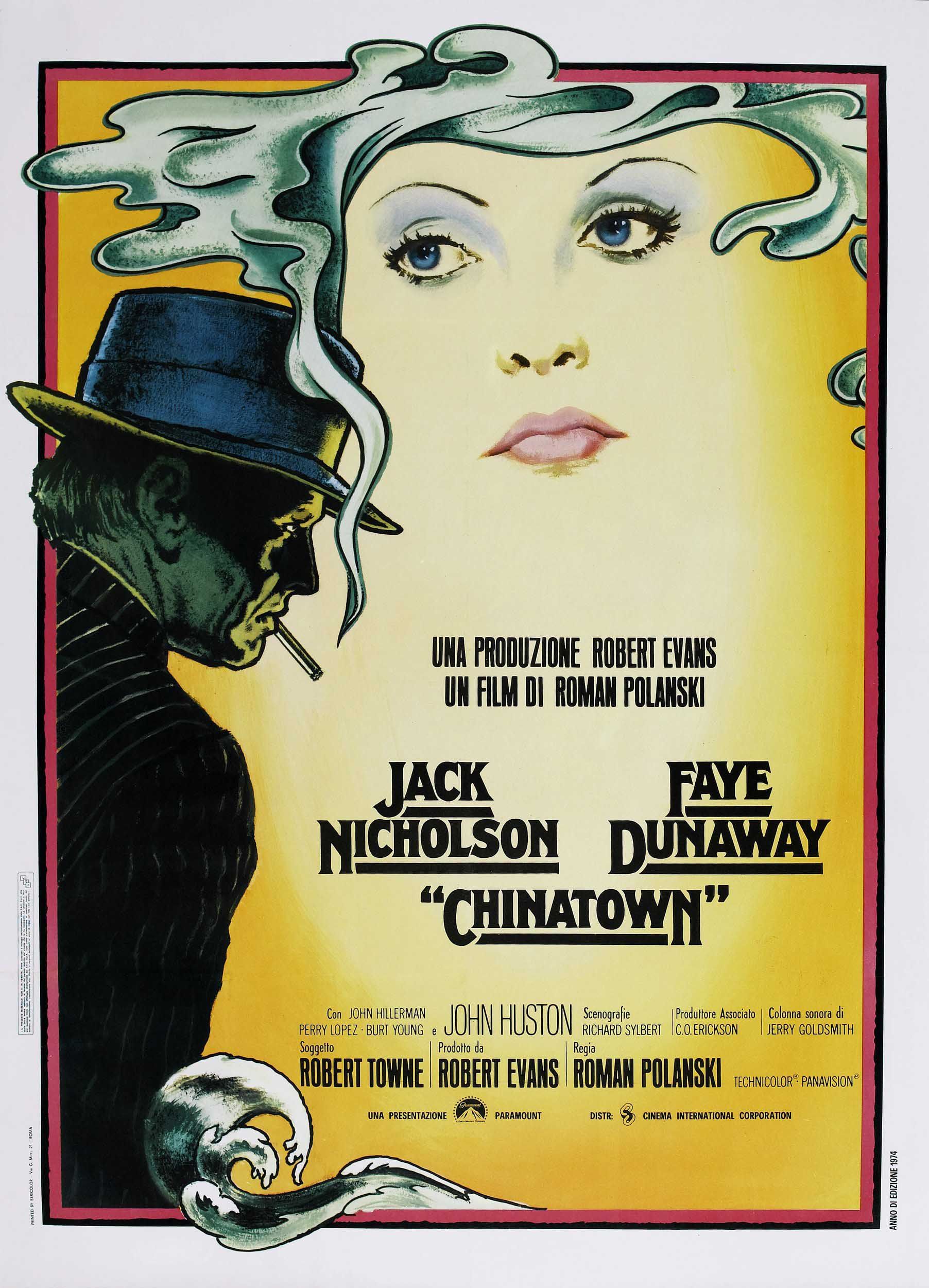 'Chinatown' is Polanski's 7th feature-length film. His first one,  Knife in the Water (1962), was made in Poland and was nominated for a United States Academy Award for Best Foreign Language Film. In the United Kingdom he directed three films, beginning with Repulsion (1965). In 1968 he moved to the United States and cemented his status by directing the horror film Rosemary's Baby (1968).  A turning point in his life took place in 1969, when his pregnant wife, Sharon Tate, and four friends were brutally murdered by members of the Manson Family. Following her death, Polanski returned to Europe. He made Macbeth (1971) in England and back in Hollywood, Chinatown (1974), which was nominated for eleven Academy Awards.

From wikipedia: Chinatown is a 1974 American neo-noir mystery film, directed by Roman Polanski from a screenplay by Robert Towne, starring Jack Nicholson and Faye Dunaway. The film was inspired by the California Water Wars, a series of disputes over southern California water at the beginning of the 20th century, by which Los Angeles interests secured water rights in the Owens Valley. The Robert Evans production, a Paramount Pictures release, was the director's last film in the United States and features many elements of film noir, particularly a multi-layered story that is part mystery and part psychological drama.

In 1991, the film was selected by the Library of Congress for preservation in the United States National Film Registry as being "culturally, historically or aesthetically significant" and it is frequently listed as one of the greatest films of all time.  At the 47th Academy Awards, it was nominated for 11 Oscars, with Towne winning Best Original Screenplay. The Golden Globe Awards honored it for Best Drama, Best Director, Best Actor, and Best Screenplay. The American Film Institute placed it second among mystery films in 2008.


From IndieWire: 5 Things You Might Not Know About Roman Polanski’s ‘Chinatown’[...]

3. Towne’s script originally had a happy ending.
As you might be able to tell at this point, it was a contentious production, with Evans, Polanski and Towne fighting pretty consistently throughout. The writer and director worked on the script for two months together in the spring of 1973, a script that Towne thought needed no improvement. Polanski recalled to Peter Biskind how they would sit there with Towne’s dog as the scribe smoked a pipe: “The goddamn dog would lie on my feet in this hot room and drool. Bob would fill his pipe and smoke, and this smoke filled up the room — it was really a hard experience for eight weeks of that. Bob would fight for every word, for every line of the dialogue as if it was carved in marble.” And Towne confirms that, “We fought, every day, over everything. Names. ‘What’s her name?’ ‘No, it can’t be that, it’s too Jewish.’ ” They came into conflict on everything from whether there should actually be a scene set in Chinatown to the noirish voiceover narration (which Polanski would cut in post-production, winning that particular battle). It was the ending that was the major bone of contention between the two, however. Towne had originally written a conclusion where Evelyn survived and killed her father. But Polanski was in a darker place — it was his first time in L.A. since the murder of his wife Sharon Tate four years earlier — and later told Biskind “I thought it was a serious movie, not an adventure story for the kids,” while Towne later summed up the director’s argument as “That’s life. Beautiful blondes die in Los Angeles. Sharon had.” Nevertheless, the scribe refused to budge for the longest time, but says that Polanski eventually persuaded him to write an alternate version: “Roman said ‘I want it written this way,’ and I responded ‘I think it would be very bad if I wrote it that way.’ He said ‘Well, try it anyway.’ So I did, and brought it back to him and said ‘See, it’s so melodramatic.’ Roman said ‘No, it’s perfect.’ We said more about it, but not much. That was that.” And so Noah Cross survived, and Evelyn is killed with a shot through the eye by the police — a nod, Dunaway says, to the story of Oedipus.

Future films:
• Friday October 20 - ‘Solaris’, based on Stanislaw Lem’s book of the same title. Andrei Tarkovsky’s 1972 adaptation (Rating: 3.5/4) is somewhat superior to  Steven Soderbergh’s version of 2002 (Rating: 4/4, with George Clooney), but we’ll go with the latter version for 2 reasons:
- it’s 1 hour SHORTER: please views the superb Tarkovsky's version in your  own time
-  this thought fro Roger Ebert: If they thought Soderbergh's smart, seductive rhythms were boring, they would have been catatonic after the Tarkovsky version.
http://www.rogerebert.com/reviews/great-movie-solaris-1972

• Friday, November 17:  ‘The Passenger’ -   unfinished 1963 Polish film directed by Andrzej Munk.    Recently an opera was made out of it:
https://www.youtube.com/watch?v=K_eSkPbTGQQ