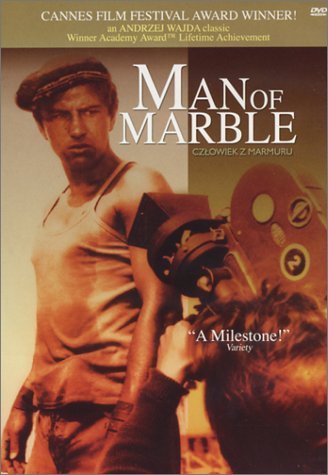 Man of Marble (Polish: Człowiek z marmuru) is a 1976 Polish film directed by Andrzej Wajda. It chronicles the fall from grace of a fictional heroic Polish bricklayer, Mateusz Birkut (played by Jerzy Radziwiłowicz), who became the symbol of an over-achieving worker, in Nowa Huta, a new socialist city near Kraków. Agnieszka, played by Krystyna Janda in her first role, is a young filmmaker who is making her diploma film (a student graduation requirement) on Birkut, whose whereabouts seems to have been lost two decades later. The title refers to the propagandist marble statues made in Birkut's image.


From the 2014 review by Philip French in The Guardian: [...] A major milestone in Polish cinema, Man of Marble comes from a period of political thaw, moderate affluence and agonised self-questioning between the end of hardline postwar Stalinism in the 1950s and the return of authoritarianism, which culminated in the imposition of martial law in 1981.

Contemplated by Andrzej Wajda ever since he completed his war trilogy in 1959, and much influenced by Citizen Kane, it features the movie debut of the charismatic 25-year Krystyna Janda as tough, chain-smoking film-school student Agnieszka, dressed in flared jeans and denim jacket. She's working on her graduation project, a controversial documentary in the then fashionable American cinéma vérité style. ("No tripods, just hand-held cameras and wide-angle lens," she tells her middle-aged cameraman.) Its subject is Mateusz Birkut (Jerzy Radziwiłowicz), a long-forgotten Stakhanovite bricklayer who became a Stalinist hero, the focus of propagandist documentaries, and then disappeared into obscurity, a victim of the system.[...]


From 1979 review from New York Times: [...] Andrzej Wajda, Poland's greatest film maker, is quoted as having said that one cannot commit heroic acts if they are useless. Such an act is a tree falling in the middle of the forest where there is no one to hear. A heroic act that accomplishes nothing is as abstract as the gesture of a gymnast. This is something to keep in mind if you can possibly get to see Mr. Wajda's extraordinary 1977 film "Man of Marble," which is being shown today at 3:15 P.M. and 9 P.M. at the Hunter College Assembly Hall. "Man of Marble" is one of nine films being screened in the eight-day Wajda retrospective that will end tomorrow. [...]


See you at the third Friday of the month - February 17th at the OKO film!