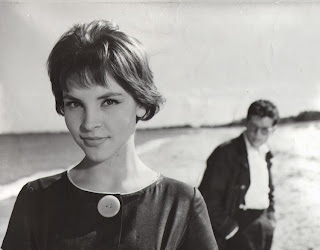 Do widzenia, do jutra takes place during the second half of the fifties in Gdansk and Sopot. A young student theatre director, Jacek,(Zbigniew Cybulski) meets a beautiful girl, the daughter of French consul, Margueritte (Teresa Tuszynska). He falls in love - in a romantic, poetry-reciting way - and shows her Gdansk. The cast is stellar: we see Jacek Federowicz, Bogumil Kobiela, and a young, almost unrecognizable Roman Polanski who plays tennis, then dances the cha cha with Margueritte on the tennis court. The student theater is Bim Bom - a legendary place, filled with jazz music by Krzysztof Komeda.
This film has been compared to the French "new wave" movies, yet it is fresh and unique. After October of 1956, when the new leader Władysław Gomułka gave Poles hope for the new future, Morgenstern showed Polish young people as creative, artistic, and full of life and dreams. Jacek and his friends are not cynical or brooding over WWII, but they are the faces of the new Poland of the sixties. 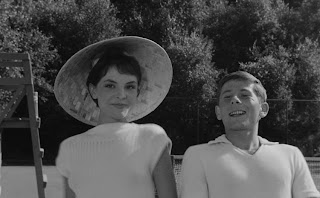 This September, after learning about Janusz Morgenstern's death, I wanted to see this movie - and I liked it very much. My mom watched it in a cinema when it was shown for the very first time. I hope our local movie aficionados will enjoy watching it at the Polish Cultural Center in October 2011 - Hanna Gil
Morgenstern