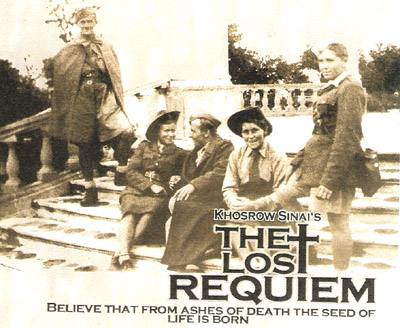 Polish Film Club OKO invites everyone to the screening of the documentary "The Lost Requiem" by Khosrow Sinai (DVD 1980, 80 minutes. In Farsi with English subtitles)

The film tells the story of the World War 2 era Poles coming to Persia from the Soviet gulag camps in Siberia. The filmmaker follows the life of several individuals, while describing the general fate of several hundred thousand former Polish prisoners. Introduction: Roxanne Emadi; discussion after the film.

It turned out to be rather large 'club' - there is obviously a hunger for this kind of information, because we had the house packed. Several former Siberian exiles came, some of their family, friends and many people simply interested in the stories of people deported to Siberia during the WW2. While the fate of the people whose lands were occupied by Hitler is generally well known, because it was part of the larger war narrative of fighting fascism, the fate of the people deported to Stalin gulags only now is reaching general consciousness.

Roxanne Emadi, a young American journalist of Polish and Persian descent did wonderful, very moving introduction about the director and how the film came to existence.

We finished evening with discussion about the film around potluck offerings, consisting mainly of Persian type treats - sweets and fruits, probably similar to those Polish Siberian exiles were greeted with upon arrival to Persia in 1942.